Thank you for choosing Lotus Physical Therapy for Women.

Telepractice can be an effective and efficient way for many to
receive physical therapy services. There may be certain
situations that would better be suited for in-person treatment
and in such cases, our therapist may advise you to seek in-
person treatment.
While use of any internet platform presents inherent
cybersecurity risks, Lotus Physical Therapy for Women
exercises precaution to protect your confidential and private
information.
Payment in full is due at the time of consultation/service
unless otherwise indicated by Lotus Physical Therapy for
Women.

Thank you for your trust and we look forward to caring for
your needs. 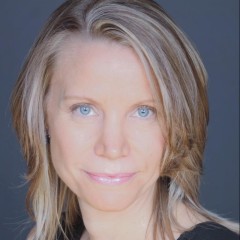 Lotus Physical Therapy for Women is now offering personalized wellness training packages for peri and menopausal women in both the Nyack and New Paltz, NY locations. The series will include separate sessions on training for bone and muscle health, posture, balance, cardiovascular fitness and pelvic floor (bladder, uterine, sexual and bowel) health and fitness. The series will consist of 5 separate hourly sessions. Call the contact number for more information and to schedule your appointment. Start learning how to properly care for yourself and set the foundation for feeling great today!!!!

Frozen shoulder or adhesive capsulitis is a painful condition of the shoulder. It is prevalent primarily in females between the ages of 40-60. One or both shoulders can become extremely painful with marked reduction in range of motion of the shoulder(s) due to thickening and adherence of the ligaments and capsule of the joint. the exact cause is unclear and can occur after treatment for breast cancer or injury to the shoulder or no apparent injury at all. It appears to be linked to hormonal change and blood sugar levels. This condition often restricts and limits activities of daily living like dressing, grooming, driving, lifting, turning in bed and exercising to name a few. It is often self-limiting but can take a very long time to heal, one to three years, if left untreated. Physical therapy including, myofascial release, joint mobilization, therapeutic modalities and stretching exercises can be very helpful in speeding the healing process. I can relate to those who are suffering from frozen shoulder myself. After an injury to my shoulder 7 months ago, my shoulder became intensely painful, with limited motion and decreased function. Thankfully, I am on the mend with lots of physical therapy and some acupuncture!!! If you are suffering from a frozen shoulder, don’t wait to get treatment. Early intervention can make a world of difference.

Working in the field of Women’s Health, patients frequently ask me how and why I became interested in doing the type of therapy that I do.

Here is what I tell them…

While in the physical therapy program at Hunter College in New York City, I became interested in orthopedics and very quickly realized that is what I wanted to specialize in.  So I did.

After I graduated and received my professional license, I began working in the field of orthopedics.  I worked at two of New York City’s prestigious Orthopedic hospitals and a private Orthopedic practice that specialized in treating performing artists.  I then went on to work at a Rehabilitation hospital where I practiced all aspects of Orthopedic physical therapy. I worked with both females and males.  I went on to become a certified Orthopedic specialist in my field.

Around 10 years into my career, I became interested in orthopedic injuries and illness that were more prevalent in females, since I am a female.   I began taking continuing education courses related to those types of subjects.  One of the courses I took was presented by a host of professionals including MD’s and the founder of the American Physical Therapy Association’s Section on Women’s Health, Elizabeth Noble, physical therapist.  The topics covered ranged from things like prenatal and postpartum exercise and care to post mastectomy care, urinary incontinence and pelvic pain in women.

I instantly realized I needed to incorporate treatment for these types of conditions into my regular orthopedic practice as there was a great need for it.  It was a found missing puzzle piece for me.   So many females require treatment in these areas and services were lacking.   I became passionate about wanting to treat in the realm of Women’s Health. So, I began taking more and more courses given by the leaders and experts in the field and became the co-founder of a Women’s Health program at the hospital at which I was working at the time.  Within a few years after that, I decided to open my own practice with the emphasis on dedication to treating Women’s Health-related conditions.

Having a strong orthopedic background has helped me to be a better practitioner and look at each patient more comprehensively. In addition to being a physical therapist, I am also a certified yoga instructor and have a background in dance, which enhances my understanding of functional movement in the body.

I love and respect the work that I do. As a female, I find it fulfilling to work with and help other women on a daily basis.  My focus is on treating females but I do treat males who have pelvic floor muscle dysfunction and/or would like orthopedic physical therapy. 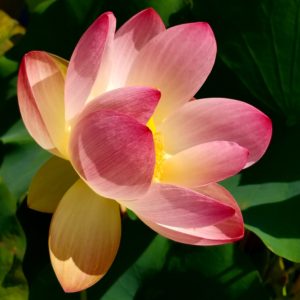 I am pleased to announce that Lotus Physical Therapy for Women, PLLC is about to open a second location in NEW PALTZ, NEW YORK!!! I will be providing the same services and can be reached via the same contact information. The address for the new location is 5 Academy Street, New Paltz, New York 12561. This location will be serving Ulster County, Orange County, Sullivan County, Greene County, Putnam County and Dutchess County, New York. The office is set to open mid-November. For appointments, please call the number provided on the site. Can’t wait to provide Women’s Health Physical Therapy to area!!! Luba Starostiak

A recent statistical study reported that in the USA alone, approximately 600,000 hysterectomies are performed annually.  Hysterectomies are performed for various reasons such as cancer, endometriosis, excessive bleeding and tumors.  The procedures can be carried out abdominally through an open incision, trans-vaginally, laparoscopically and more recently, robotically guided.  The scope of the percentage of reproductive organ removal varies from removing just the uterus to complete hysterectomy where uterus, cervix, ovaries and even a portion of the vaginal canal are excised.  Pelvic organs (uterus, ovaries, bladder and bowel) contact each other inside of the body by proximity and connective tissue attachments.  This type of surgery can disrupt the natural function and stability of both internal organs as well as that of the pelvis and spine.  Hysterectomy has been linked to incontinence, surrounding organ prolapse, back pain, abdominal weakness, to name a few.  After having a hysterectomy, whether partial or complete, it is helpful to have guidance in learning how to restore function to abdominal and spinal muscles as well as strengthen pelvic floor muscles to provide internal stability to remaining organs.  Learning proper body mechanics for mobility and exercise can be extremely helpful.  Seeking guidance from a Physical Therapist who is an expert and specialized in Women’s Health, can help decrease pain and restore lost function and potentially further problems down the road.

Avoiding a sedentary lifestyle through exercise can help reduce some of the negative effects associated with menopause.  The decrease in hormone production during this time, especially estrogen, can lead to a host of changes in the body.  Women often experience weight gain, loss of muscle mass and strength as well as a decrease in bone mineral density which may lead to osteopenia or osteoporosis.  Depression and fatigue are also commonly reported and experienced.  Weight gain can lead to obesity if unchecked.  Obesity has been shown to increase the risk for cardiovascular disease and diabetes.  Osteoporosis can lead to fractures in the wrist, thigh bones and/or spine.  These potential problems can be addressed by avoiding a sedentary lifestyle.  Adding 30 minutes per day of exercise on most days, including weight-bearing exercises and resistive exercises have been shown to increase bone density, decrease the risk for diabetes and cardiovascular disease, control excessive weight gain 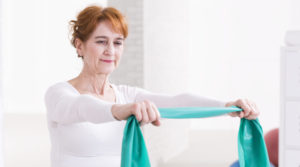 and diminish depression.  Weight bearing exercise could simply be brisk walking for weight-bearing to the lower extremities and pelvis.  Weight bearing can also be done in the form of exercise on hands and knees if possible, like gentle yoga.  This would help with weight-bearing to the upper extremities and upper spine.  Exercising with resistance bands or weights strengthens both muscle and bone.   A 2016 study by Kai, Nagamatsu, Kitabatake and Sensui in the journal Menopause showed that gentle 10-minute nightly stretching, for example, before bed-time could also help diminish symptoms such as hot flashes and feelings of depression.  So a combination of aerobic-type exercise along with resistance training as well as stretching all prove to be beneficial as women transition through their menopausal and post-menopausal phases of life.  It is always best to be guided by a professional, like a physical therapist whose training and expertise is in Women’s Health for best out-comes and avoidance of injury.